I just started a blog on memories about my Aunt Joanie and wanted to share it.

“I first met Aunt Joanie just before she married my favorite Uncle, Bob. My uncle was but 16 years older than I, and I had a HUGE crush on him. I was furious that he was getting married!! (I think my sister, Cindy, felt the same way.) AJ was so beautiful.

At their wedding, my father was the hero of the day, as he found a replacement for the missing white carpet AJ needed to properly walk down the aisle. My sister got to be a flower girl with my cousin, Bug Riesmeyer (Sutton). Having all the guests sign the guest book was my job. My brother, Stewart, and Bug’s brother, Duncan, raced each other to see who could eat more carrots, Stewart, or olives, Duncan, at the reception. I believe both were over 200 each when they both raced to the bathroom! AJ’s best friend Jennie Jones was the maid of honor.
I am going to put in wedding photos first. And then I will put in various photos of AJ before we met her, including photos of her parents and sister, Marguerite. Later I will add photos of her, my uncle and all of their children, grand children, and friends. …”

Read more by visiting the blog. 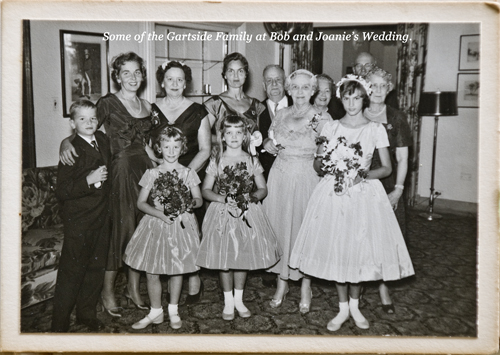