I am excited to share some of the amazing photographs that wildlife photographer, Lee Cordner has taken on a trip to Machias Seal Island. The island, in the Gulf of Maine, is home to a variety of wildlife, including the Atlantic Puffin. 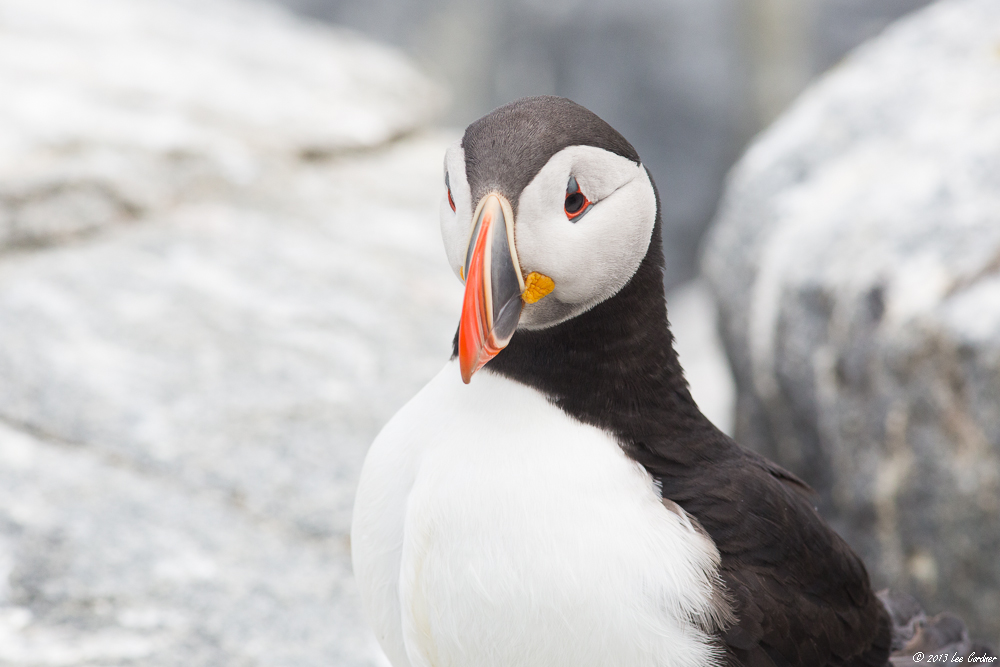 Machias Seal Island: Wednesday at 6:45am

Wednesday morning at 6:45am Chris and I arrived at Cutler for our second opportunity to land at Machias Seal Island (MSI).  We were unable to land the day before because of weather conditions.  The harbor is a working harbor, and it was socked in with fog like it had been the day before.  The plus this day was that it was not raining, and you could not see a lot of swell action on the shore.  We boarded our tour boat, Barbara Frost, by 7:45am and were heading out of the harbor with a landing skiff in tow.  That was a positive sign as compared to the day before, we had not had the landing skiff.

On the way out of the harbor we past a mature bald eagle perched in a tree, another good sign.  Out on the ocean it was still foggy, with light to no wind and a three foot swell left from the day before.   After about an hour of motoring we arrived at MSI.   The tide was low, so the potential for landing was better.  MSI, depending on where you read, is somewhere between 10  – 15 acres, has no trees, but in some areas it does have ground vegetation.  During the summer there are two lighthouse keepers, a handful of biologist doing studies on the birds, and at least 15,000 adult nesting birds.

There are three predominant birds on the Island, all from the auk family.  All three can fly very fast, however they are not very maneuverable.  They are all excellent swimmers and divers, in fact the common murre has been recorded diving to 500 – 600 feet below the surface. The three auks are: 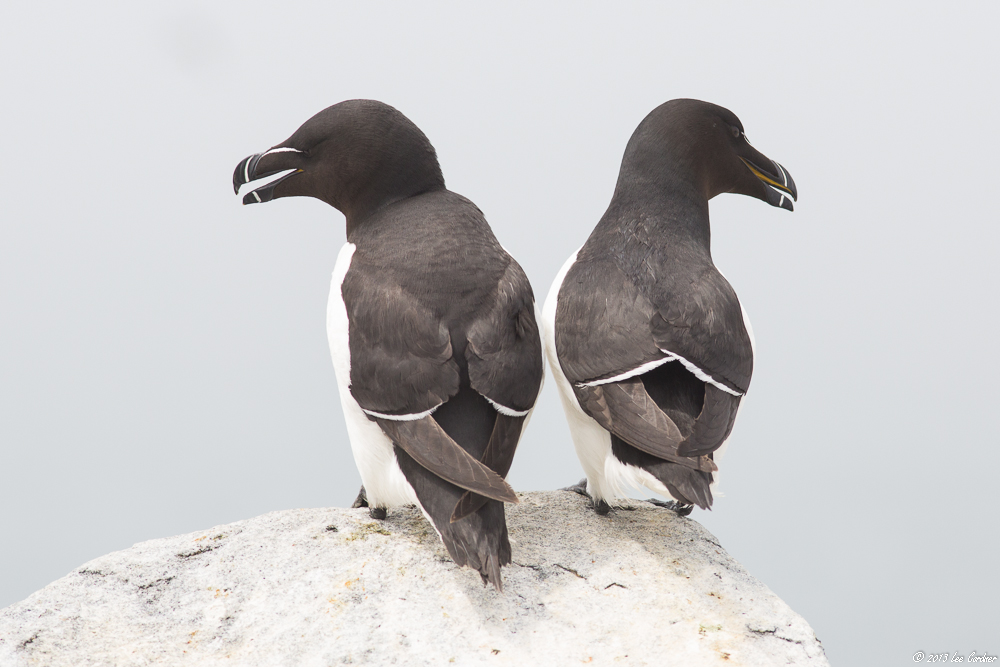 We anchored the Barbara Frost and then had to take three trips in the skiff to the Island to get the sixteen of us ashore.  Once on the Island, because it is a bird sanctuary, you can only walk on the board walks that are open to you.  We were all brought to a patio area near the lighthouse where we were given an education and an orientation about the birds and what we were allowed to do.  We were then brought, in groups of four, to permanent blinds in different nesting areas on the Island.  Once inside the blinds, we were permitted to take out our cameras and take pictures.  It was one of the most incredible two hours I have ever spent.  We were in amongst thousands of birds.  All of the auks nest in burrows in the ground or holes between the rocks.  We were constantly seeing the adult birds flying back to their nests with either nesting materials or with baby fish they were bring to their young.

The sounds around us were amazing.  The birds make a sound like an idling chainsaw or grass trimmer, and there were thousands of them idling all around you all the time.   You would hear the thump of the birds landing on the blind, you would see them come within six feet of you.   All the birds seemed to express so much character and personality.  Our two hours seemed to end in the blink of an eye, and 900 photos later we were heading back to Cutler.

This was one thing on my bucket list that was everything I had hoped for, and that I would do again without hesitation.

Fortunately for us it was overcast, so we could take photos of the birds in diffused light.   If it had been a sunny day the light would have been too harsh during the hours we were on the Island.

Other birds we saw and photographed in the two slide shows:

We had a wonderful trip and we got to live a dream.

That is all from Maine, I hope you have a wonderful week. 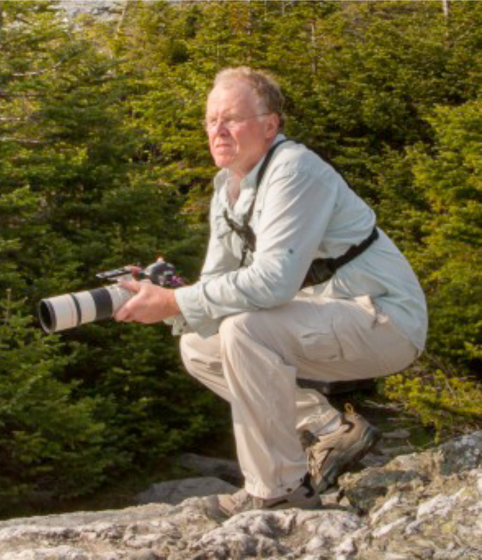 Lee Cordner has lived all of his life in Vermont.  As a child he developed an appreciation for the outdoors and wildlife from his parents.

His father’s interest in photography was passed on to Lee at an early age.  Cordner used his photographic talent to work his way through graduate school.

Cordner and his wife live in Colchester, where they made a home for themselves and their two daughters.

Cordner’s specialty is wildlife and outdoor photography however he also photographs sports, portraits, weddings and machinery.  He shares his talent by contributing to local magazines, newspapers and mailings to many friends throughout the world.

Lee’s Photos of the Atlantic Puffins on Machias Seal Island

The scientific name of the Atlantic Puffin: Fratercula arctica

Average life span in the wild: 20 years or more (The oldest known puffin was 29 years old!)

Do you love puffins? 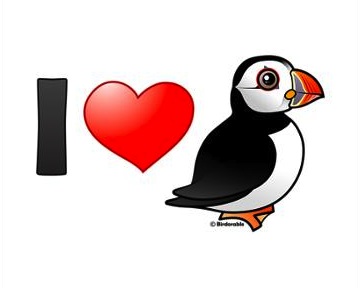