Both the designers and the owner love the results of high-tech detailing and innovative finishing touches to this fine lakeside home. 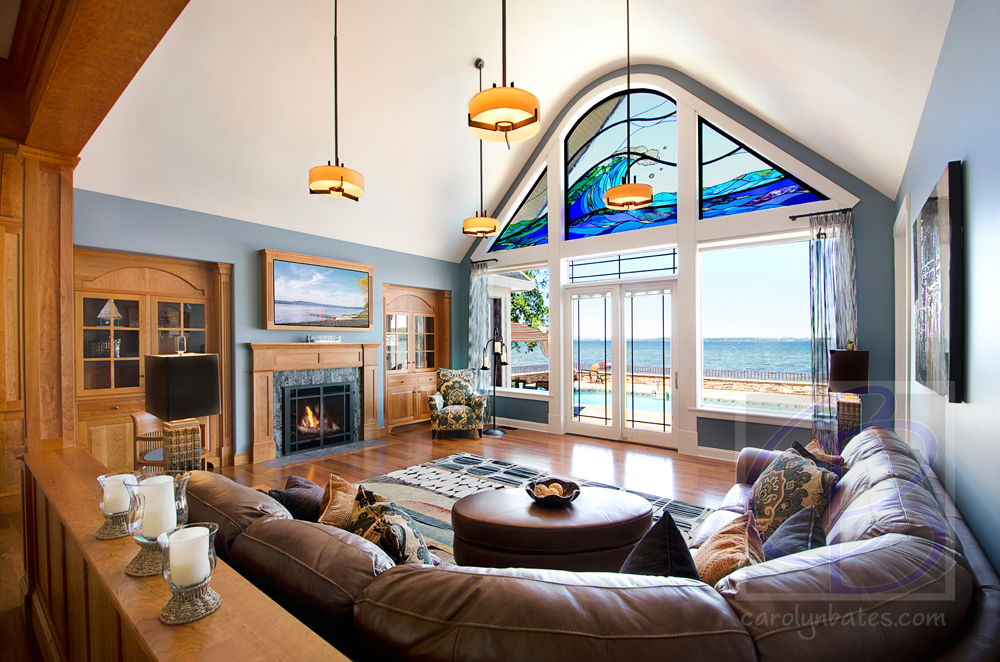 Take the Tour • Flip through the online magazine.

As the owners of Sheppard Custom Homes, Tom and Donna Sheppard have lived in many spectacular houses. When they were designing a new house for themselves, they saw an opportunity to experiment on a large scale. The result is visually stunning, technologically advanced, and true to its environment. It is so great, in fact, that they never got to move in. As the Sheppard Custom Homes crew was starting work on it two years ago, Tom received a call asking if the house was for sale. “My wife thought it was a little big and over the top, so we decided to sell it,” said Tom. “The new owner was great. His instructions were to finish the house exactly as we would if we were going to move in.”

Tom Moore crafted all the woodwork for the house. Donna wanted the house to have an open floor plan, but the space was so large that it would have been overwhelming. Tom’s woodwork serves to make some separation and designate different rooms while leaving the floor plan open. Each room has its own angle, but the wood ties them all together. The beautiful woodwork that Tom Moore fashioned presented a challenge when it came time to light the house— there was very little room to put light switches without ruining the detail of the wood. To solve the problem, Tom Sheppard decided to program the whole house to run on iPad and iPhone technology. No matter where you are, you can turn on the lights. “I never thought I’d get excited about an electronic house, but it eliminates more than half of the light switches in a house this big,” he commented. “It’s my first electronic house but it won’t be my last!”

Read the full article by downloading the PDF here.