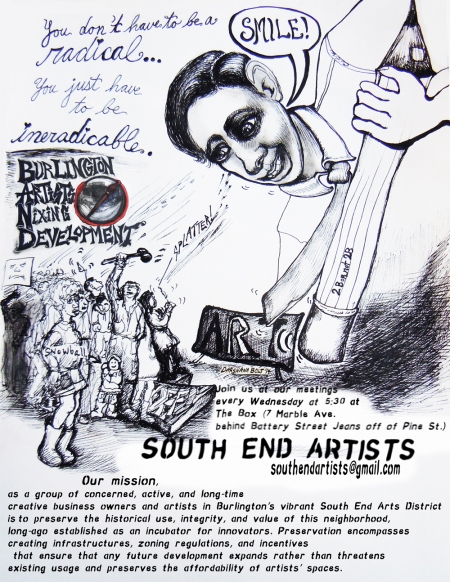 Protect it, empower it, and it will blossom.

The South End Alliance is an alliance of business owners, artists, innovators, educators, workers, residents, commuters, and more, with an interest in the future of the South End. They are coming together in response to the City of Burlington’s request for input on the draft PlanBTV 2015 planning document. With a focus on ecological consciousness, the arts, grassroots community activism, and large and small businesses, they are a diverse group striving for a future that protects the innovation, arts and industry of the Enterprise Zone* within the larger South End.

* The Enterprise Zone (27% of the South End) comprises the South End Arts District and is home to a crucial kind of cultural cross-pollination: a unique fusion of “makers” of all stripes, where vital connections are forged every day.

The South End Alliance is a rhizome-like resource for the sharing of voices, concerns, and ideas regarding city planning, specifically, the impending rezoning of Burlington’s arts- and industry-oriented EZ as outlined by the City of Burlington’s PlanBTV South End.

What is their vision?

The South End Alliance is advocating for a preserved and enhanced Enterprise District. This small (4%) of the city is home to 20% of the jobs and 92% of the industrial space for the city of Burlington. We believe a commitment to its preservation and empowerment for the future would create an even more exciting and innovative center for our city. We have a number of visions that could be combined and supported to create a truly unique area, focusing on qualities that are consistent with what was intended by the creation of the Enterprise District in the late 80s/early 90s. Instead of making the common mistake of destroying a Naturally Occuring Cultural District by converting industrial zoning to mixed use, Burlington has the opportunity to be on the cutting edge of sustainable city planning. Vermont is known for boldly going where other states do not and we believe this choice will make all the difference.

1. Energy Efficiency
The district will become a 2030 energy district with goals for net zero by 2030.This area has two critical utilities – Burlington Electric Department and Vermont Energy Investment Corp/Efficiency Vermont both known for innovation and many others who would support such an investment in the future. Other New England states ahead of Vermont on creating 2030 Energy Districts are New Hampshire and Maine. Burlington’s EZ is much better adapted for stepping into the future by testing out an Energy District rather than compromising this unique zone with “new urbanist” mixed-use housing complexes.

2. Transportation
The area becomes a model of enhanced regional collaboration to address Burlington’s housing issues through transportation reform. Currently there is no real regional authority, and no one associated with the Burlington housing problem seems to be thinking about a regional inclusionary strategy. Public transportation is the glue that would tie this together, but in PlanBTV South End, it is mentioned only in passing as an inappropriate analysis (you can’t compare Burlington to Portland OR, for example), or in an insufficient way (as in: there is a need for better bus scheduling).

The central issue of how better public transportation can both help empower the Enterprise Zone as well as help resolve the “affordable housing” problem is never given any weight. Imagine cool housing projects anywhere outside of the Enterprise Zone with improved bus service and/or parking garages with commuter rail. Public transportation can turn a whole number of issues on their heads if we think outside the limited vision of PlanBTV South End, and certainly if we stop glorifying the Champlain Parkway as any kind of solution. Instead of talking about building housing and other infill in the rail yard, we envision promoting the revival of the transportation railroad already planned by the stakeholders of the rail yard.

3. Ecological Design
With an emphasis on values and principles of ecological design, the area will embrace cutting edge approaches to storm water, watershed design, and preservation of green space and wildlife sanctuaries.  Imagine roof-top gardens and community parks, re-greening and responsible clean-up of contaminated areas, connectivity between streets, homes, studios, and lake. Imagine a holistic approach that takes the future generations into consideration.

4. Education
The area is home to both artists and makers and manufacturers. Imagine a center of training, making, building, creating and hands-on learning that educates a strong and diverse artisan and manufacturing workforce to both provide person power to existing business as well as create innovators of new business

5. Resources
When we place an emphasis on the area’s innovation, incubation, entrepreneurship, business, artistry and craftpersonship, we can work to provide resources that allow this activity to flourish and go beyond the current parameters. Resources would include legal, professional, health care, insurance, patents, mechanization, and other support services, at reasonable rates to allow ordinary makers to take their work to the next level.. The district is home to hundreds of creative people and businesses. We envision this resource of creativity supported in all possible ways, both in avenues to expression as well as financial support..

6. Culture and History
The industrial history of the area, as well as the history of the rail yard, provide cultural opportunities to explore, exhibit, and educate on this colorful history, as well as on the continuation of that historic tradition into the present. Imagine a museum of industry that follows the early history of the Pine Street corridor from Lumiere to Maltex to the Bottling plant to the brush factory. What was made here and how? What is made here now and how is it related and different from what was made in the past? Such a museum would include examples of actual products and services that come from this industrious area. Imagine all new buildings in harmony with the aesthetic of the district, some made with re-used materials, all featuring public art; all sensitive to the history of the area.

8. Local business
Local business and manufacturing brings local dollars and local jobs. It enhances the economy in a sustainable Vermont-based way. Instead of replacing traditional Vermont craftsmanship and trades with technology, new technology can develop in tandem with a focus on preserving and enhancing the kinds of manufacturing that Vermont is famous for, increasing tourist interest in the South End and in Burlington.

9. Food hub
With the organically occurring food/beverage industry in the ED, with chocolate, cider, beer, bread, yogurt and bagels, the area becomes a hub for food production and a farm-to-product/farm-to-table supply line. With a central food processing center, along the lines of the food venture center, farmers would be supported with a direct line facility to food product producers. This kind of industry is perfect for Burlington.

10. Innovation
With an emphasis on enhancing and supporting creativity and maker activity, there is no telling where innovation could be expanded, whether artistic, inventive, entrepreneurial or handcrafted. Room to grow in organic ways is what we want most for the Enterprise District. As the former president of CEDO, Bruce Seifer says, the young innovators of today are the world savers of tomorrow. Our vision of the Arts and Enterprise District is a vision of an area that supports and protects all the creative potential for the city. Instead of altering the area with a large percentage of non-artist, non-manufacturing-related infill, imagine requiring that all new buildings have 50% affordable artist and manufacturing space (the current plan suggests 3-15%). Manufacturers in the South End complain about dis-incentives to industry such as high taxes. Imagine creating incentives to expand and sustain manufacturing in the South End as part of the Manufacturing Renaissance happening nationwide today!

When you compare the possibility that comes with a city-wide commitment to protecting the arts and industry of the Enterprise district to a frequently made mistake of allowing housing, which both hikes up market rates and consumes all available spaces for a higher profit use, we believe the road less traveled makes the most sense for Vermont.

Let’s preserve the 4% area called the Enterprise District. Let’s bolster, empower, and enhance it for a future that defies gentrification and is directed toward a vision of creativity, innovation and manufacturing. 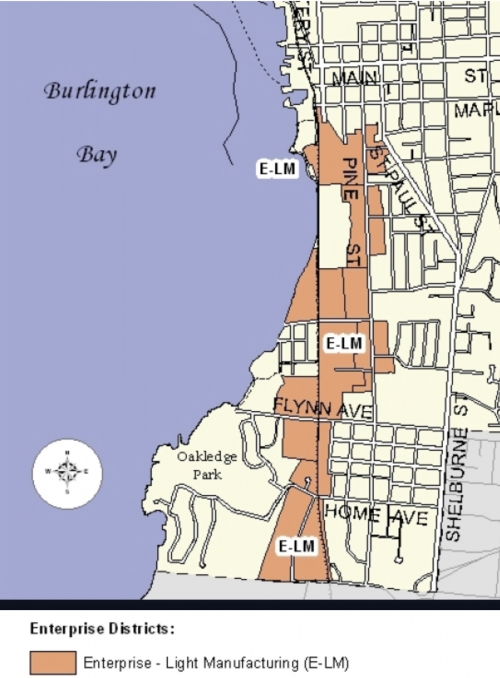 Find out more about the ENTERPRISE ZONE

The ENTERPRISE ZONE (EZ) is part of the South End Zoning District and is shown in Burlington’s Comprehensive Plan and Official City Map as making up 4% of the city in overall area. It also provided 20% of the jobs and 92% of the industrial space. It is currently protected by being zoned Industrial, and by excluding Residential land uses.

We disagree with the draft PlanBTV report which calls for changing the current Zoning to allow a different mix of uses, especially the call for Residential mix. From research in other cities, especially those who have changed their Industrial Zones to Mixed-use Zones and Combined Residential the loss of jobs and industry have been marked. Please see related articles under the RESEARCH link. The zoning change will easily transform Burlington into a bedroom community as jobs move to other parts of Chittenden County.

Also please see research and data by Amey Radcliffe re. interviews with residents and workers within the EZ under MYTHS.

The 2 Enterprise districts as illustrated in Map 4.4.3-1 (see to the right)

1. The Light Manufacturing (E-LM) district is the primary commercial/industrial center of Burlington , and is intended primarily to accommodate enterprises engaged in the manufacturing, processing, distribution, creating, repairing, renovating, painting, cleaning, or assembling of goods, merchandise, or equipment without potential conflicts from interspersed r esidential uses. Other accessory commercial uses are allowed to support a wide range of services and employment opportunities. This district is intended to ensure that sufficient land area is appropriately designated within the city to provide an adequate and diversified economic base that will facilitate high – density job creation and retention. This district is primarily intended to provide for industrial uses suitable for location in areas of proximity to residential development. Development is intended to respect interspersed historic industrial buildings, and reflect the industrial aesthetic of the district’s past. Parking is intended to be hidden within, behind, or to the side of structures. 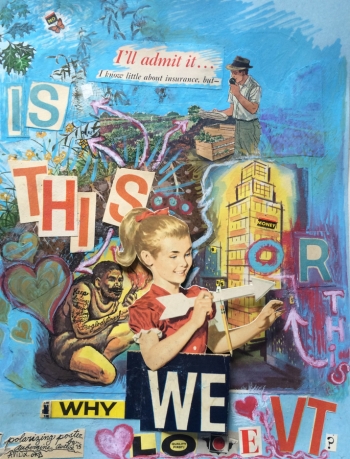 About the Alliance in their own Words:

We believe the Arts and Enterprise District should be protected and enhanced. Protecting it means prohibiting competing uses (housing and high-end infill). Empowering it means allowing manufacturing and innovation to thrive. In addition we believe some former restrictions that applied to the district should be reinstated and fine-tuned for the 21st century so that gentrification and commercialization are inhibited and community-driven priorities are fostered. Lastly and most importantly, we envision a simple paradigm shift away from status quo development-as-usual and toward responsible and innovative growth that is 1. grassroots and community-based, 2. slow and organic, 3. foregrounds artistry, making, and innovating as its central mission, 4. imagines creative, historically sensitive, trade-specific, and cultural education as integral, 5. takes the environment fully into account, both by setting modern efficiency standards and goals and protecting wild and green spaces, 6. revises an outmoded plan for a parkway that is not needed or wanted and instead invests in non-car transportation such as rail, monorail, shuttle, bike and walk infrastructure, and 7. is willing to boldly go where other cities have not.

The South End Alliance is a rhizome-like resource for the sharing of voices, concerns, and ideas regarding city planning, specifically, the impending rezoning of Burlington’s arts- and industry-oriented EZ as outlined by the City of Burlington’s PlanBTV South End.

Join in the Coversation on the South End Artist Talk Facebook Page!

Find out more information at southendalliance.org.