Christine Hadsel & Curtains Without Borders were featured in Valley News.
Check out the great article and learn more about the book which is available now!! 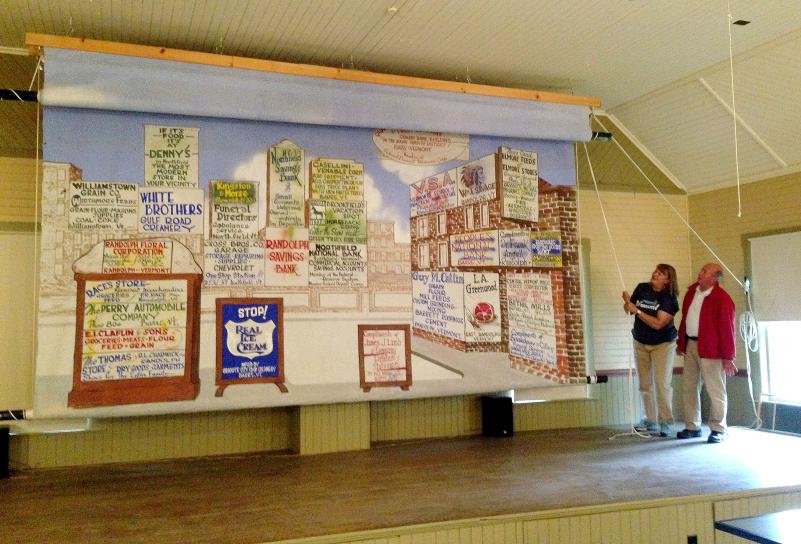 The latter version is captured in a mural of water-based paint on muslin that can be rolled up or dropped down, and 80 years ago it formed the backdrop for plays, vaudeville acts and other forms of entertainment in the town decades before television and the Internet made juggling and pantomimes quaint memories.

The work by New Hampshire artist Robert Naves — water-based because oil-based paints were more expensive and would crack when rolled — is one of about 500 theater scenic curtains found — and half of them restored — in recent years in town halls, Grange halls and other public venues around Northern New England. A group of conservators and vernacular art enthusiasts called Curtains Without Borders has made this their mission.

Now the fruits of the group’s labors have been collected in an art book, Suspended Worlds: Historic Theater Scenery in Northern New England, by the group’s director, Christine Hadsel of Burlington, with photography by Carolyn L. Bates.

Hadsel said in an interview the work focuses on Northern New England because that’s where the conservators are based. But she said the group recently received a grant from the National Endowment for the Arts to take the search for the historic curtains nationwide.

Read the complete article on the Valley Times website.

**Photo Above: In this Tuesday, Aug. 11, 2015 photo, Christine Hadsel, left, director of Curtains Without Borders, works the pulley to display a theater scenery curtain from the mid-1930s at the restored Town Hall in Brookfield, Vt. Beside her is Ted Elzey, chairman of the nonprofit Brookfield Community Partners. Hadsel has produced a book on her group’s efforts to find and restore old theater backdrops from the early 20th century. Many venues had sets that included a backdrop advertising local businesses, like the one pictured here. (AP Photo/Dave Gram)**

The New Book is here! 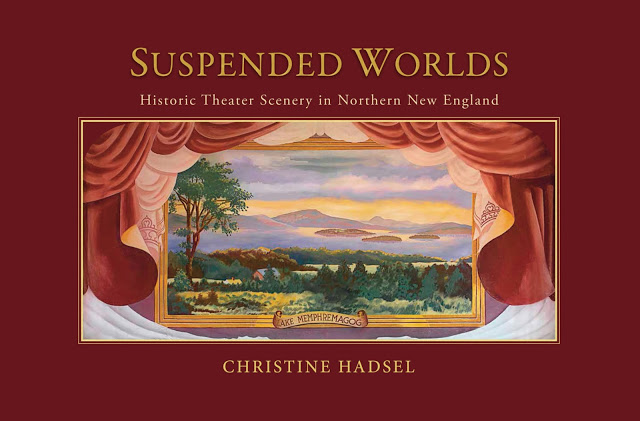 An ode to American folk art, Christine Hadsel’s SUSPENDED WORLDS features a gorgeous collection of historic theater scenery in Vermont, New Hampshire and Maine.  Before television, radio, and the internet, live theater was a community’s main form of entertainment, a way to be transported to another time and place. Each grand drape and backdrop, colorful and memorable in its own way, is a testament to cultural life between 1890 and 1940.

Conquering a century of dirt, damage, and neglect, Hadsel led a team of conservators from “Curtains Without Borders” as they took on the Herculean task of restoring hundreds of these historic painted theater curtains for community use and display. From romantic landscapes, to picturesque streets, to advertising drops, these hand-painted scenes are beautifully preserved in full-color photographs—an ambitious presentation that celebrates otherwise overlooked pieces of vernacular art.

Order Now at David Godine Publisher, Inc. or Find it on Amazon.com!

About Curtains Without Borders:

Curtains Without Borders is a conservation project dedicated to documenting and preserving historic painted scenery. The painted curtains are found in town halls, grange halls, theaters and opera houses. They were created between 1890 and 1940, although on rare occasions, pieces painted after 1940 are also included in our inventories.

Curtains Without Borders began in 1996 as a project of the Vermont Museum & Gallery Alliance. Thanks to initial support from the National Trust for Historic Preservation, a statewide survey was undertaken to find and assess the condition of Vermont’s collection of historic painted scenery. We thought there might be 25 pieces, but the total number of historic painted curtains in Vermont eventually grew to 185. We believe we have now found them all.

Conservation work began in November, 2002, and as of December, 2010, every curtain has been cleaned, mended, and judiciously in-painted. Of these, about 25 have been put into “deep” storage because they are too fragile to be displayed or there is no place to install them. There is one that is ready to go back on stage in a newly-restored town hall, and all the others have been installed for use or public appreciation in town halls, grange halls, community theaters, opera houses, or other community centers. As a statewide collection of public art, the curtains gained recognition from the National Trust for Historic Preservation as one of “America’s Treasures”. The many years of conservation were supported by the National Endowment for the Arts, including a Save America’s Treasures grant. Vermont foundations, individuals and businesses matched the federal money and thousands of volunteer hours made the work possible.

Vermont was the first state to pay attention to these reminders of a time when even the smallest village halls held local variety shows or school performances and many towns were visited by traveling troupes of players, opera companies, vaudeville singers, and itinerant musicians. Between 1880 and 1940, painted scenery (primarily roll drops, with a few “fly” scenes) was especially popular in northern New England and the upper Midwest. Unfortunately, many were discarded as they became worn and dirty, as tastes changed and as many theaters became movie houses. However, in Vermont, curtains were often bundled up with baling twine, stashed in ceiling crawl spaces or shoved under the stage. By bringing the scenery back into public view and giving it new life with stabilization of the fabric, paint and support systems, we hope to encourage the continued use of our cultural, social and political centers.